We are excited to announce that the newest book by Dr. del Marmol,  ISIS: the Genetic Conception.  This true story reaches back in time to the first seeds that sprung up into the group we know today as ISIS. A variety of conspiracies and government inaction contributed to this modern horror, and our master spy himself was watching it all unfold!

Dr. Julio Antonio del Marmol, a freedom fighter and a master spy, has been identified by his enemies.  His mission is too critical to abort, so he must deal with the immediate threat in order to be able to complete the objective given to him: to identify the new connections Cuba has to Islamic terror and to prove to his friends in the intelligence community that it poses an immediate threat to United States security. 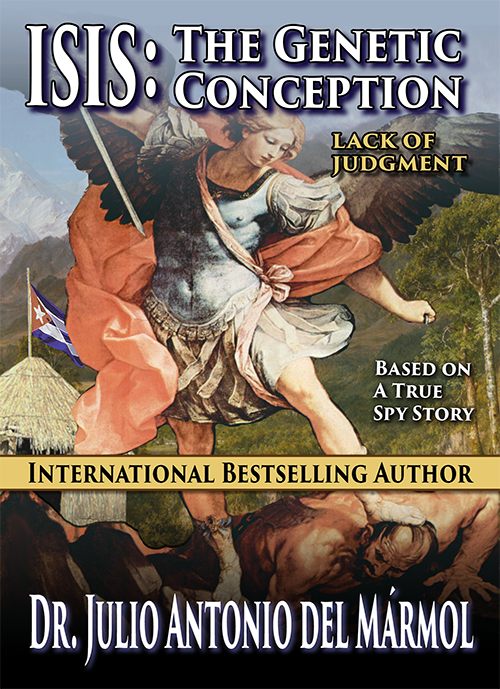 Dodging Cuban counter espionage agents at every turn, del Marmol infiltrates the tightest security arrangements of the Cuban G-2 with the aid of fellow freedom fighters on the island, and is able to identify key agents from the Middle East.  In the process, his mentor is also able to uncover a horrific assassination plot against the newly-elected President of Mexico and his entire family.

Despite the desperate urgency of his primary mission, del Marmol stops in Mexico to assist in averting the plot, while sending along the information he had just uncovered.  Successful in his secondary mission, in addition to finding new love and making new important contacts, he is frustrated by the timidity of the bureaucracy controlling US intelligence.  More proof is needed.

Del Marmol returns to Cuba to get the proof.  As Dr. del Marmol discovers, the fanaticism of the jihadists creates an impenetrable wall, transforming into the most difficult job of his career:  to persuade one of the radicals to cooperate with him in exchange for large quantities of money.  He finally reaches an agreement with the terrorist to meet with one of his most trusted freedom fighters to close the final deal.  Unfortunately, del Marmol is arrested en route to the meeting and has to escape from the police station.  The delay scares the connection away, and so key information in preventing the planned attack is lost.  Utterly frustrated, del Marmol is forced to leave hastily to avoid the massive manhunt mounted by the G-2 as they uncover his true identity as the most wanted spy, sought after for the last 40 years.  Using a Spanish merchant ship to escape with the information he had been able to glean, he regrets missing the most critical piece of data, lost on the most random chance.

His enemies remain in hot pursuit, and ambush him in the United States. Though critically injured, is able to preserve the information his assailants sought.  He is taken to a safe house in Mexico to recuperate.  His recovery, however, delays further investigation, specifically in discovering the answers to precisely how and when the planned attack would occur.  After brainstorming with his friends, the final keys are discovered, and they hastily depart for the United States to bring the information to his US contact.  His assailants strike again as he attempts to cross the Mexican border, and have further designed another delaying tactic by arranging a security breach at the border crossing by having their own agents within US intelligence list him in the computers as “armed and dangerous.”

Again, the bureaucracy moves too slowly, and by the time all the pieces are put together, it is too late to prevent the attack and the loss of thousands of innocent lives.  All that can be done is to minimize the damage, rally the American people, and mourn the dead.  Utterly frustrated, he leaves the country, realizing once more that the same freedoms he fights for also provide the greatest weaknesses for his enemies to exploit. Order online.